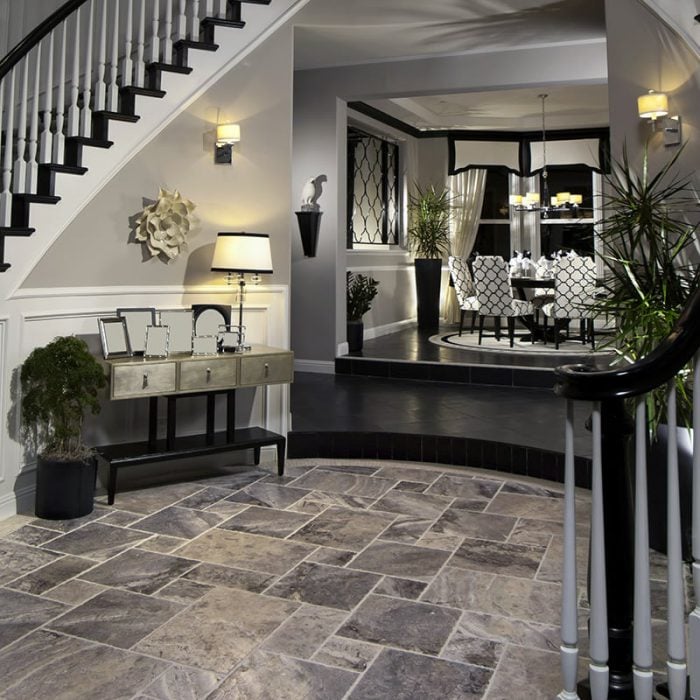 The Versailles Stone Pattern takes its identity from the French palace of the same name. The Palace Versailles was converted from a mere lodge by Louis XIV  in the late 17th-century to a structure of such opulence that the exorbitant cost is still a subject of much historical debate and conjecture. The Palace became a symbol of absolutism and the French ancien regime by the time of the French Revolution in the 18th-century. Politics aside, Versailles features the  “Hall of Mirrors”, intricate gardens and pressurized water fountains that still amaze visitors today. The image below barely does justice to the Palace and grounds as those of us lucky enough to have visited can readily attest to!

The Versailles Stone Pattern, sometimes referred to as the French Pattern, is from our Silverado Travertine Collection. Shown in the image at the top of this post, the pattern typically consists of four sizes and shapes that work together from a modular and repetitive standpoint. As you can see, it can be imagined in 18th-century French elegance and then realized in an open, airy, architectural style which is so in demand for fashion-forward design plans today.

To further enhance the design viability of Silverado, we now offer a unique chiseled and brushed surface that contributes a distinctly distressed visual to residential and commercial floors alike. Marble Systems, throughout its history, has endeavored to marry the essential style of European traditions with current design sensibilities. In the mid-winter of 2018, we continue to search for that beau ideal. We have locations across the U.S. and the Caribbean. We are a place where ideas come to grow!