MidCentury Modern design is still intriguing us over half a century later? However, what is it really all about? Who drove its adoption and when? What are its key components? Let’s consider this topic for a while and see what how it relates to MidCentury Modern Stone.

The period is arguably seen as dating from the mid-thirties to the mid-seventies. Naturally, there is a great deal of debate on this point. Personally, I have always felt that it looks and feels fifties and sixties. Who originated the style is very interesting. It is simple to think of many of its aspects as being spurs of the Bauhaus and International schools. So the usual litany of geniuses, Gropius, Le Corbusier, Breuer, and Mies van der Rohe come to mind. But don’t be so hasty. This somewhat organic American iteration may be more aptly represented by furniture designers George Nelson, Edward Wormley, Eero Saarinen, Harry Bertoia, Charles Eames, and Jens Risom, pictured left to right below. 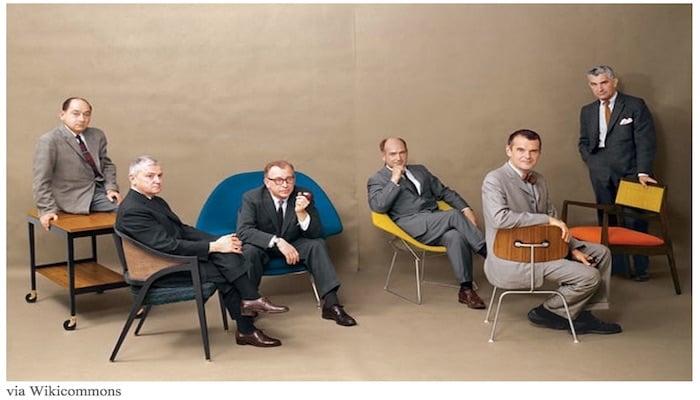 Now, what defines Mid-Century Modern Style? Sian Winship, of the Southern California Chapter of the Society of Architectural Historians said for HGTV that “the houses had open floor plans and giant sliding-glass doors, which encouraged people to go outside and be healthy. In a traditional home, the window height is 4 to 5 feet, and you can’t see out as a child. With these walls of glass, children became engaged and open-minded because the environment stimulated the senses in a different way.” Then add somewhat of a flat plane approach as exemplified by flat roofs and the elevational changes that inspired the term “split level” and you begin to build a piece by piece picture

Now back to some reality. We had neighbors who lived in a MidCentury Modern type Home. So trust me in this, in speaking to the owner of a midcentury modern property eventually the topic of maintenance will come up. After all, glass, wood, metal, and other staples of this genre need constant attention, and flat roofs notoriously leak. So you take the good with the bad. In the end, clean and crisp design plans like these play very well with tile and stone. Hence the topic of the post: MidCentury Modern Stone.

At the very top today, check out Marble Systems riffing on Eames style wall covering from our Mod Glam Waterjet Designs. Then immediately above some stone design inspired by Harry Bertoia. To wrap this up, Marble Systems has showrooms across the USA and now also in Puerto Rico and the Dominican Republic. Go into one of them and the professionals there will help you find your MidCentury Modern muse! Thanks for reading!